This Instant Pot Peach Crisp is the perfect end of summer healthy dessert.  Gluten, dairy, and refined sugar free, you can even eat this Peach Crisp for breakfast if you want (I want)!

1–2 T arrowroot flour or corn starch (optional…this is to thicken the peaches.  I often leave this out) 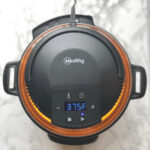 **To cook in the oven – bake on 350 for about 40 minutes or until the fruit is bubbly and the topping is golden brown.