This 21 Day Fix Lazy Zucchini Enchilada Skillet is an easy, low carb and no yellow way to get all the flavors of enchiladas, but with the veggie goodness of zucchini instead of tortillas!

Apparently it was National Zucchini Day the other day…and I guess I missed it.  Ooops. I need to somehow note these social-media-created food holidays a little better for next year.  But, seriously, I already feel like my life has been taken over by my zucchini crop and I’ve been busy making everything zucchini from pancakes to pizza. 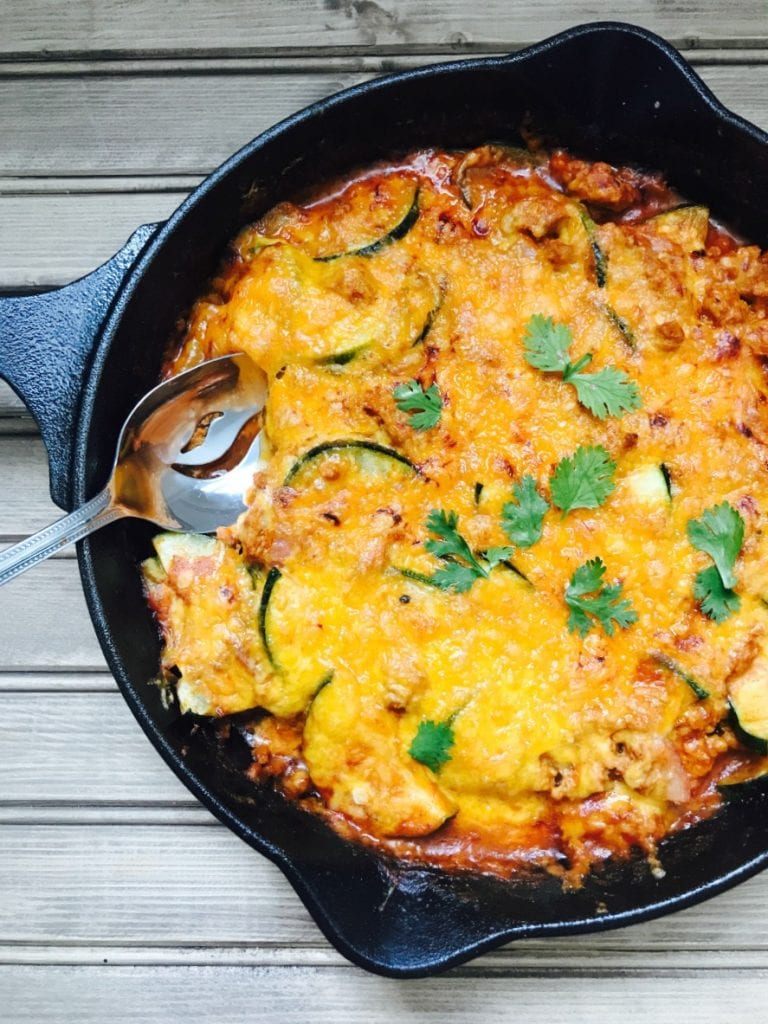 A lazy, one skillet Zucchini Enchilada Bake, that is.  Much like my 21 Day Fix One Skillet Lazy Zucchini Lasagna and my 21 Day Fix Lazy Butternut Squash Lasagna, this tasty dinner is low carb with zucchini taking place of the corn tortillas.  This was inspired by an awesome recipe video that I kept getting tagged in on Facebook where thinly sliced zucchini was used as the tortilla in a chicken enchilada meal.

But I would literally be dreaming if I had time to slice and stuff a bunch of zucchini so perfectly.  So instead, I threw the ingredients together in a skillet and, I have to say, it’s still pretty dreamy. 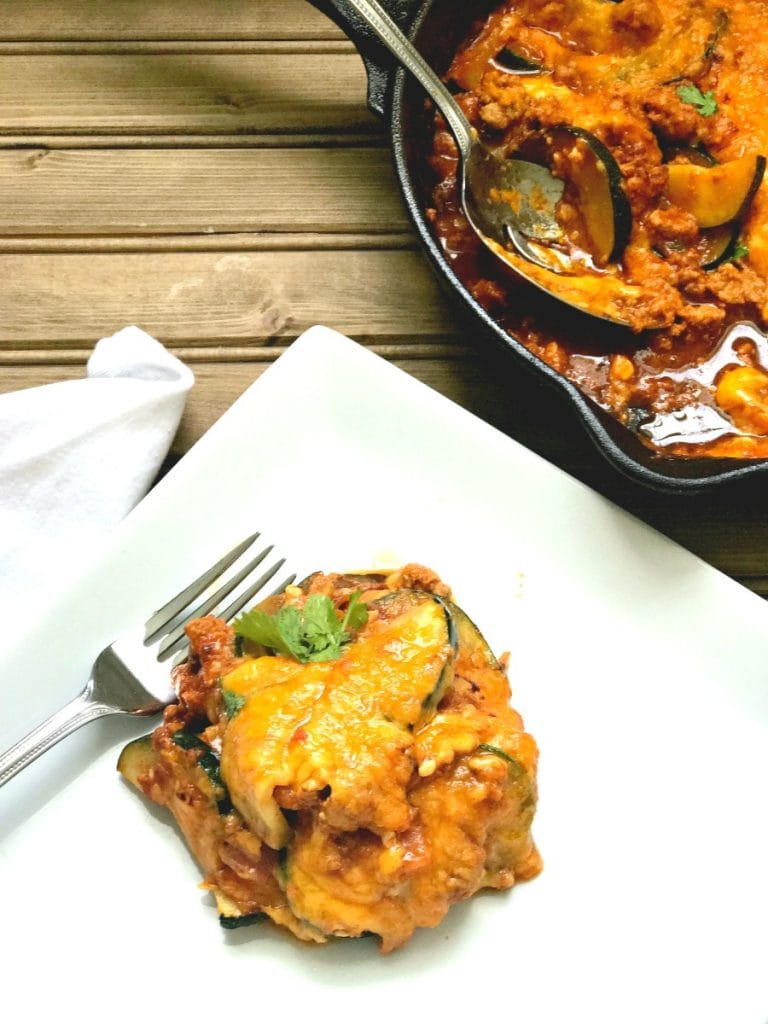 What’s not to love?  Cheesy, melty deliciousness with just the right amount of homemade enchilada sauce to trick your brain into thinking you are eating something totally off plan.

I tried this with both ground turkey and diced chicken…I actually think it would be delicious with shredded chicken, but the point of my version of this dish is ease and I felt like precooking and shredding chicken was a deal breaker.  Ain’t nothing lazy about that. 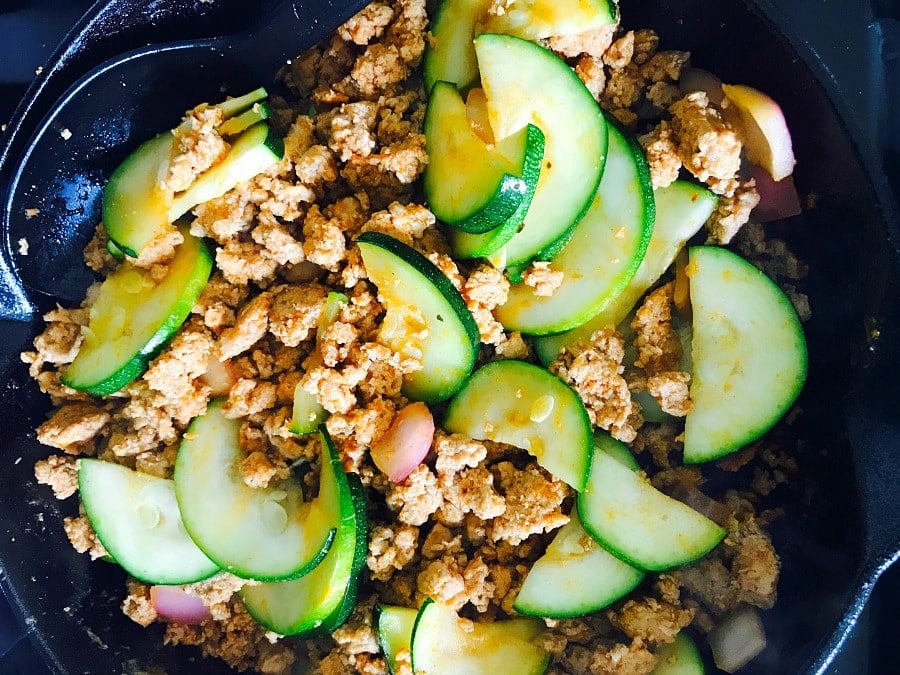 The ground turkey was just better than the diced chicken, too…the texture was perfect where I feel like diced chicken can dry out too quick, especially when you are melting cheese under a broiler.

That being said, you could easily make this with ground chicken or ground beef and it would be SOOO good.  And if you happen to have shredded chicken on hand, give it a try and let me know what you think!

To keep with the lazy theme, my homemade enchilada sauce is stupidly easy to make.  I used it for 21 Day Fix Enchilada Beef Dip, Pork Enchiladas Flatbread Pizza, and I actually have a soup I need to share with you where I also use it.  All you need is a can of tomato sauce and some pantry spices.

And to make the sauce taste just a little naughtier, I added cottage cheese and plain Greek yogurt to it before throwing it over the veggies in the skillet.

I promise you.  You will not taste either one.  You will only taste cheesy goodness. 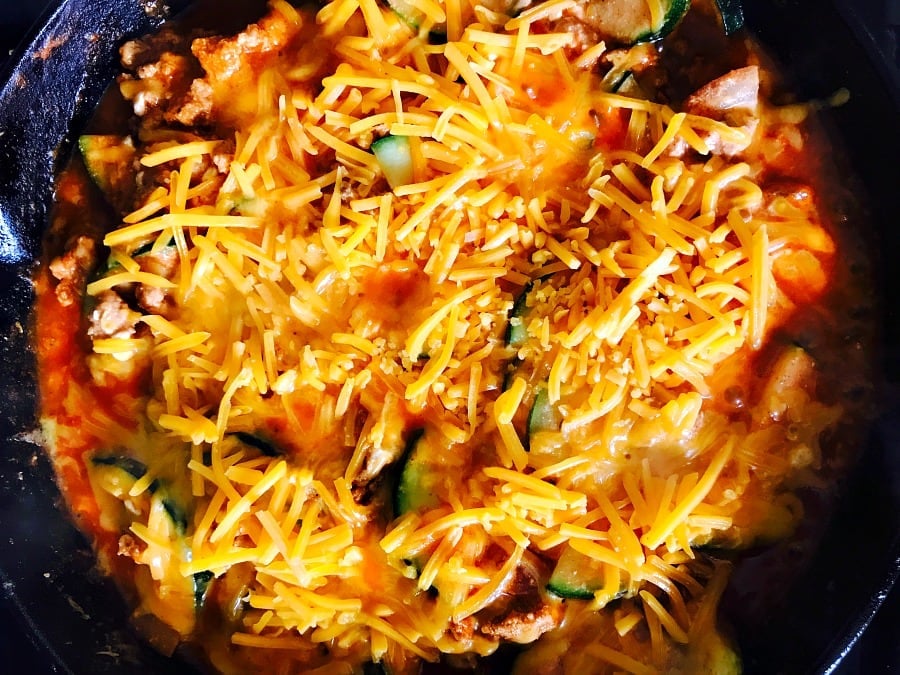 You could totally serve this in a tortilla if you want to, but I swear you won’t need it.  It’s so good and so filling on it’s own. 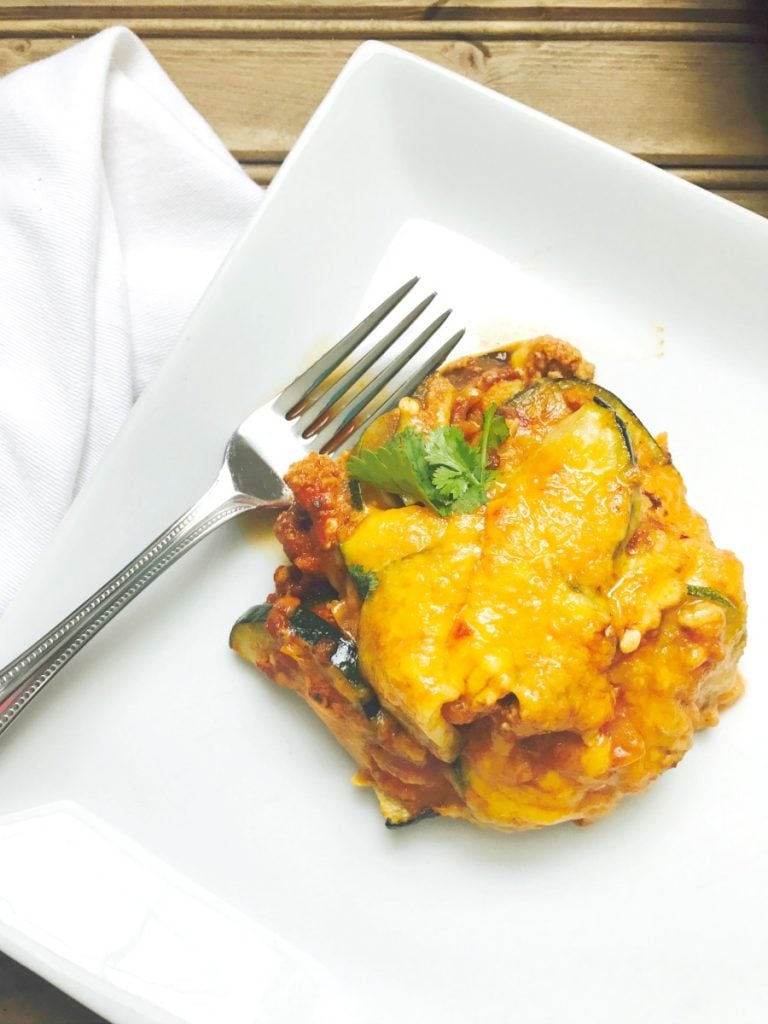 I actually had it for lunch the day I was testing it out and I was so full for hours which almost never happens.

Anyway, go ahead and celebrate a belated zucchini day with this totally FIX approved skillet and maybe even make yourself a skinny margarita with it, too.  After all, it’s a holiday!  And if you need more zucchini recipes, check out this round up! 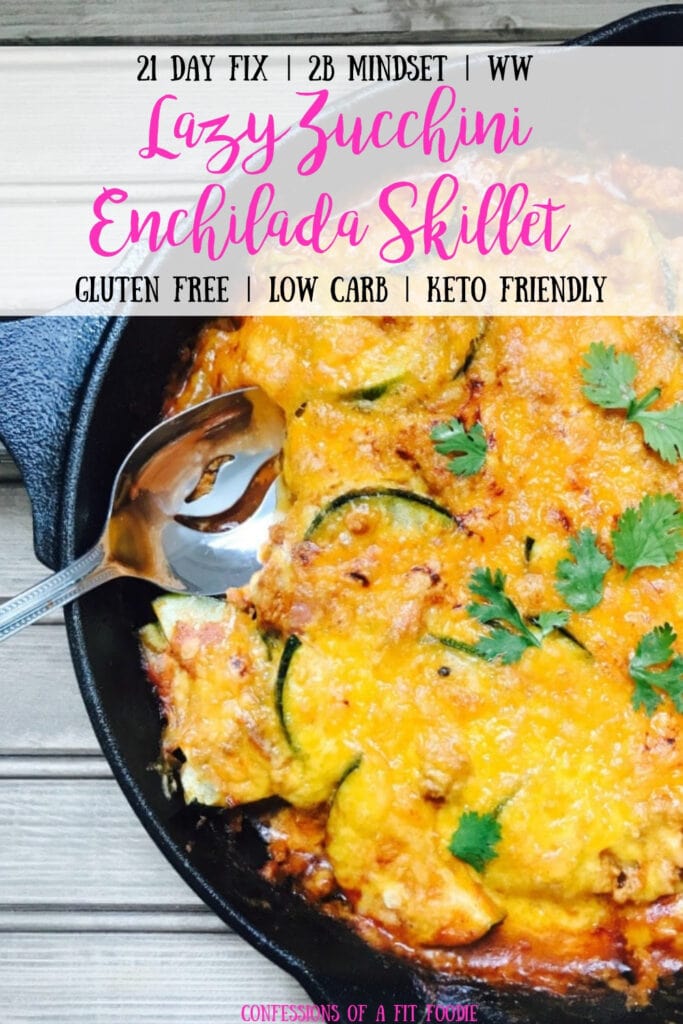 Want to see this Zucchini Enchilada Skillet on a Meal Plan?  Check out this post! 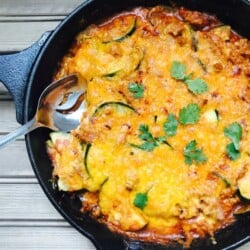 Author: Nancylynn
This 21 Day Fix Lazy Zucchini Enchilada Skillet is an easy, low carb and no yellow way to get all the flavors of enchiladas, but with the veggie goodness of zucchini instead of tortillas!
5 from 8 votes
Servings : 4 servings
Print Recipe Pin Recipe
Prep Time 10 mins
Cook Time 15 mins
Total Time 25 mins

For the Enchilada Sauce