So quick and easy – this Gluten Free Apple Crisp is fast enough for a weekday dessert (or breakfast), but delicious enough for the Holidays. I make this as an Instant Pot Apple Crisp, but you can also make this in your oven. Made with fiber rich oats, almond flour, and honey or maple syrup, this Healthy Apple Crisp is perfect for anyone looking for a yummy and clean dessert! This post contains affiliate links for products I’m obsessed with. 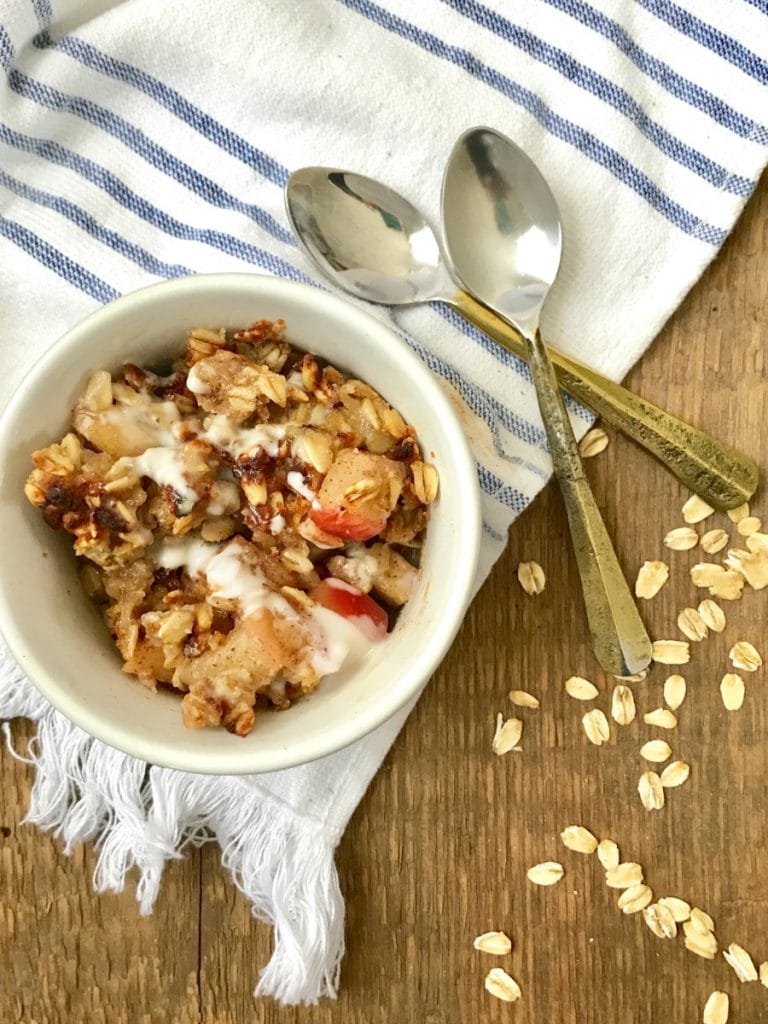 This is a sponsored post on behalf of Bob’s Red Mill. As always, all opinions are 100% mine. Thank you for supporting the brands that help make Confessions of a Fit Foodie possible.

Not because it’s unhealthy…no, it’s actually really good for you.

But it’s also so freaking easy and quick to make, I keep making it.  It’s safe to say, all of my purples, yellows, and blues have gone to this delicious treat.  I have been slow to venture into the world of Instant Pot

desserts, but this recipe has me believing! 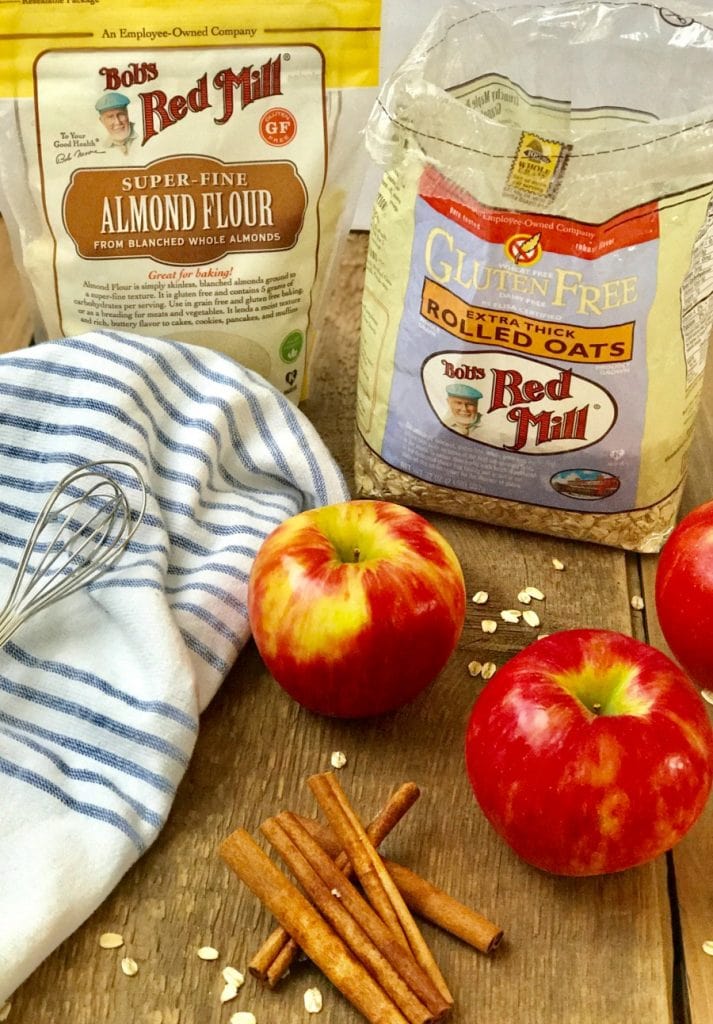 Yes! Because all the treats in my house must be gluten and dairy free, I turned to some of my favorite Bob’s Red Mills products to help me out.  I’m a traditionalist when it comes to Apple Crisp, so I used Bob’s Red Mill Gluten Free Rolled Oats for the topping, but I also added my all time fav – the Super Fine Almond Flour – in place of traditional white flour.  If you are a regular follower of my blog, you know I’m a huge fan of this product. It’s what I used in my 21 Day Fix Pineapple Upside Down Cupcakes and my Clean Peanut Butter Cup Chocolate Cake. Amazing texture and the perfect mild, nutty flavor for all sorts of yummy, gluten free baking. 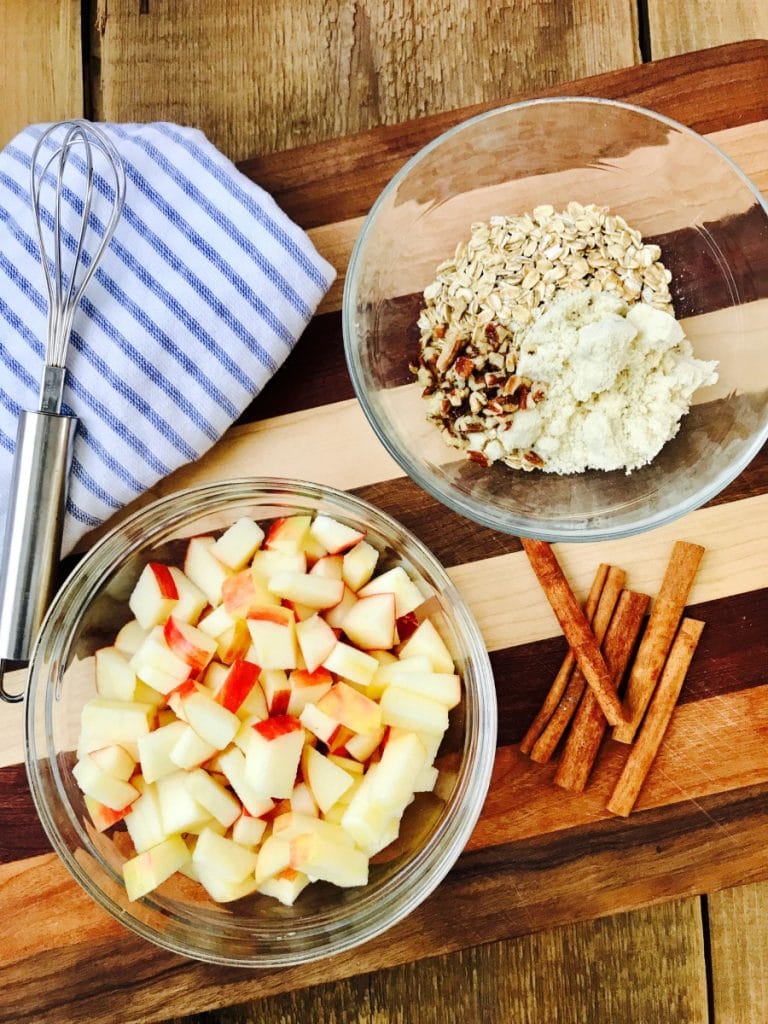 What kind of Apples should I use for this Gluten Free Apple Crisp?

I used Honeycrisp apples for this recipe, but it would also be delicious with Granny Smith or even Pink Ladies, which are in season this time of the fall.

Do I have to peel the apples for this Healthy Apple Crisp?

Also, you can see in this pic that I left my peels on the apples…this, I’ll admit, was out of total laziness, but holy cow, I will never do it the old way again. The filling had such a pretty color and I swear the peel gave it extra flavor and sweetness.  So, your choice, but I highly recommend this shortcut. 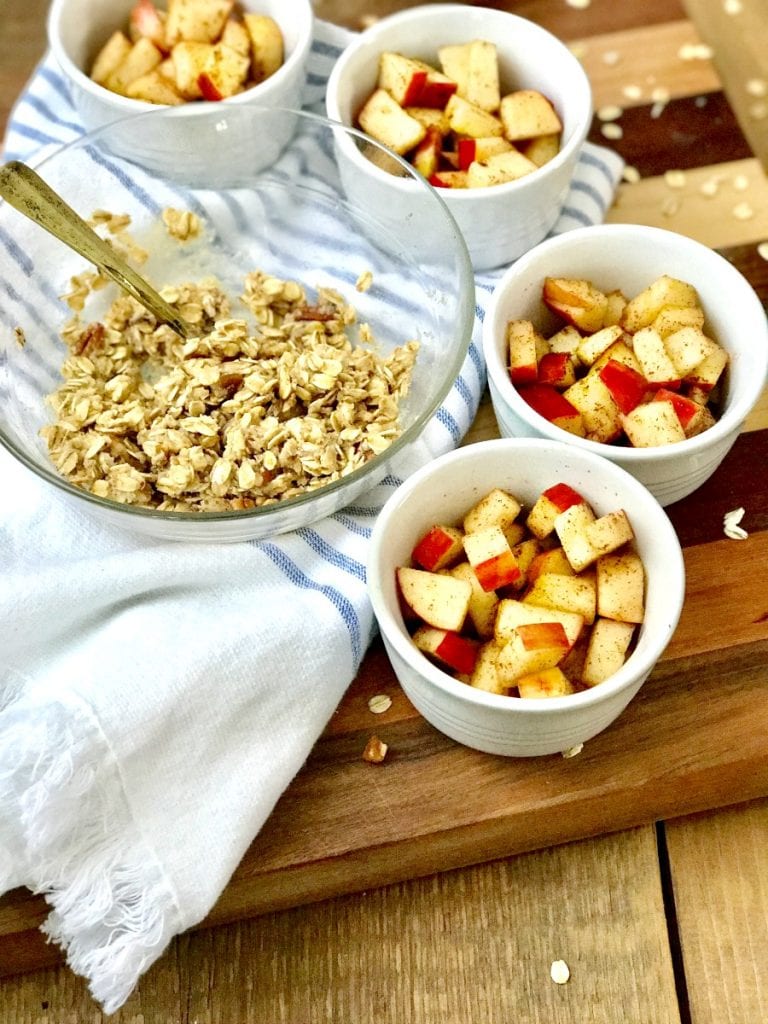 While butter is allowed in small amounts on the FIX, my little guy is dairy free, so I used coconut oil in the crumb topping.  I am not lying when I say I like it better than the butter version.  Pinky swear.

This also works as Vegan Apple Crisp if you use maple syrup instead of honey!  Yay! 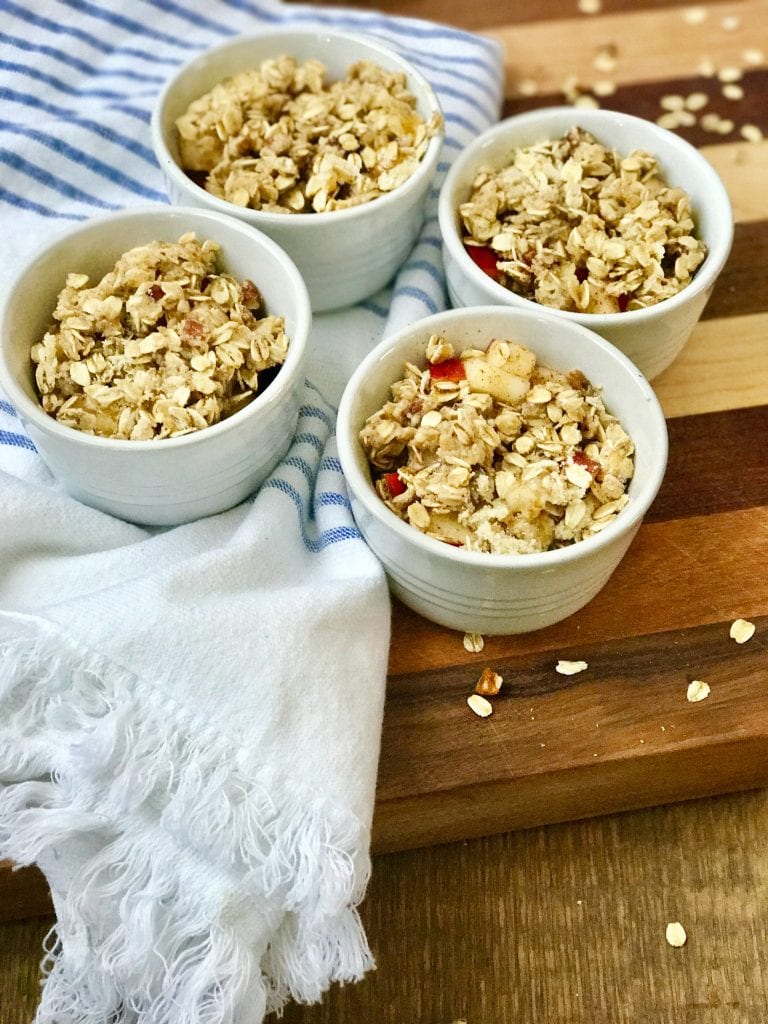 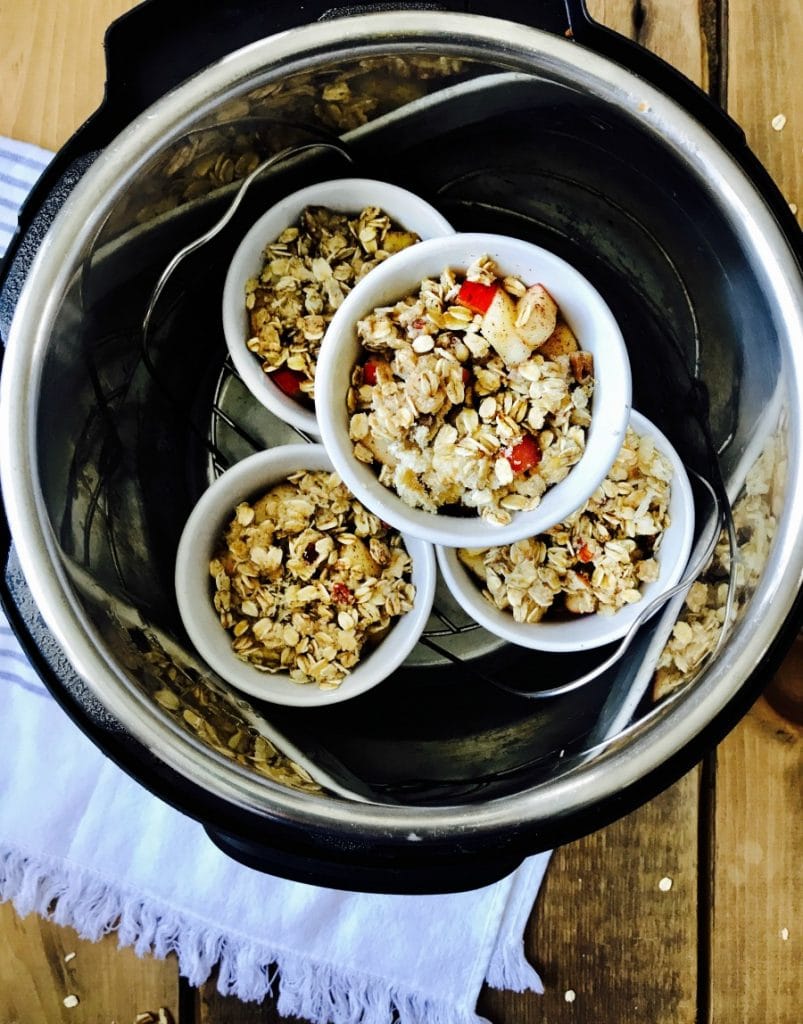 How long do I cook Instant Pot Apple Crisp?

I set my Instant Pot for 7 minutes for Honeycrisp, Granny Smith or even Pink Ladies. If you are using a softer apple, like Gala or Macintosh, I would recommend less time or your Apple Crisp will turn into Apple Sauce.  I had to stack my ramekins like this, but no biggie…and I also didn’t cover them.  Again – lazy. 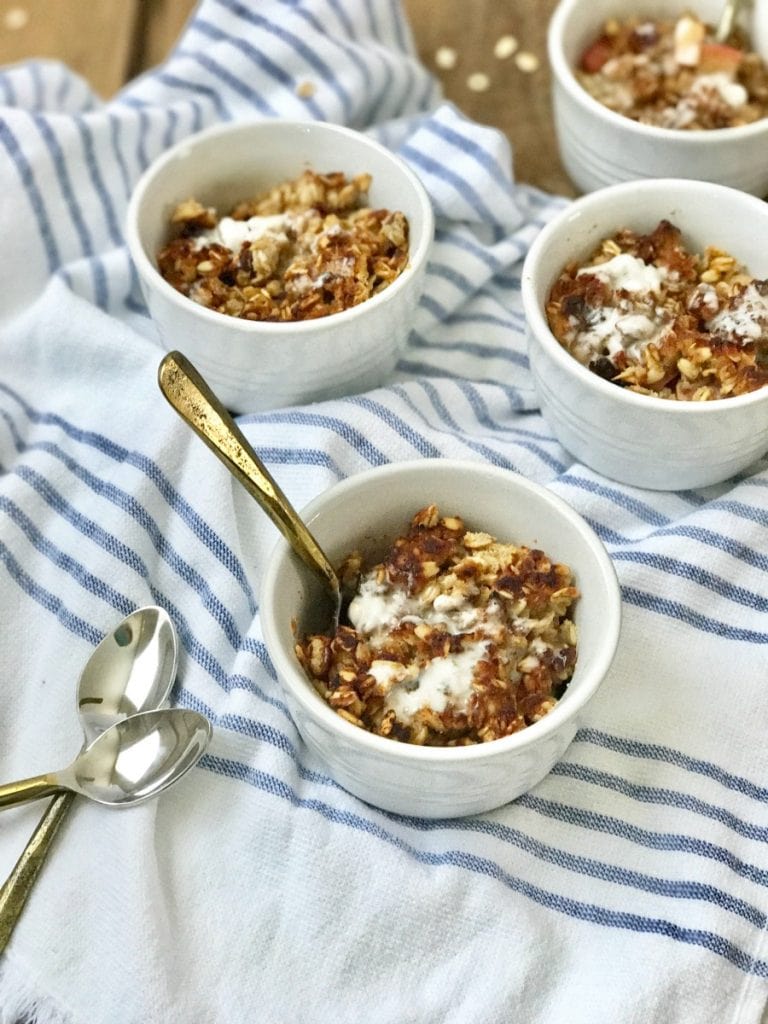 How do I make this Instant Pot Apple Crisp Crispy?

After the cooktime was up, I did a quick release and carefully transferred my little ramekins onto a baking sheet.  Because I listen to my readers and apparently a crispy top was a must, I broiled them for just a few minutes and watched them like a hawk so they didn’t burn.  It’s a fine line between beautifully golden and a burned dessert, let me tell you!  Anyway, I also wanted to say that these are also SO good straight from the pot, too.  Your call! 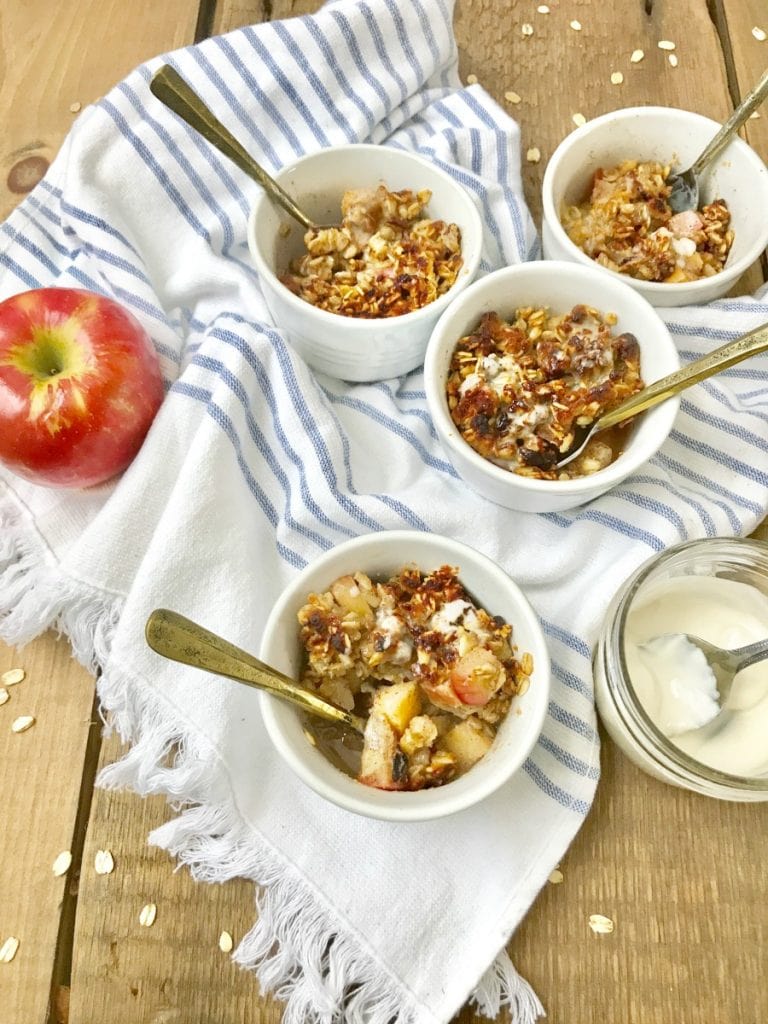 And I didn’t want to do a heavy coconut whipped topping for this, but my kids go bananas when I top them with the coconut cream drizzle that I used in my Cinnamon Bun French Toast Cups.  It’s super easy to make, but you can do without if you don’t have coconut milk on hand. 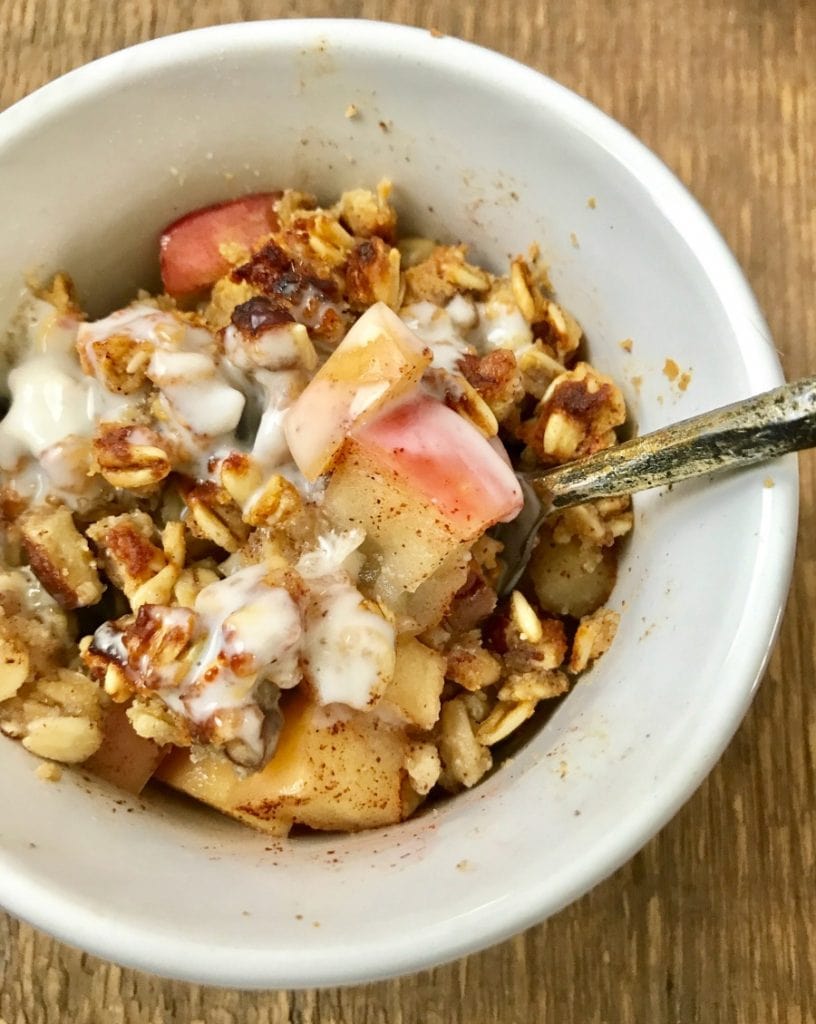 Can I make this Gluten Free Apple Crisp in the Oven?

If you don’t have an Instant Pot

(WHY???), you could bake this on 350 for about 40 minutes or until the apples are bubbly and the topping is golden brown.  And while it’s baking, go onto Amazon and commit to an Instant Pot for goodness sakes! <3

Can I freeze this Instant Pot Apple Crisp?

100%!  If you want to make this Instant Pot Apple Crisp and freeze some to enjoy later, that works!  Just place in an air tight container and eat within 3 months for best taste.

Yes, but I would skip the coconut cream topping and use something more point friendly or just leave it off!  Without the cream topping, this is 9 Free Style points per serving!

What are the 21 Day Fix Containers for this Healthy Apple Crisp?  Is this considered a “treat swap?”

Each serving is 1 Purple, 1/2 Yellow, 1/3 Blue and 1 tsp.  There are also 3 sweetener teaspoons and no, this apple crisp is not a treat swap!  Enjoy as many time as you want per week! 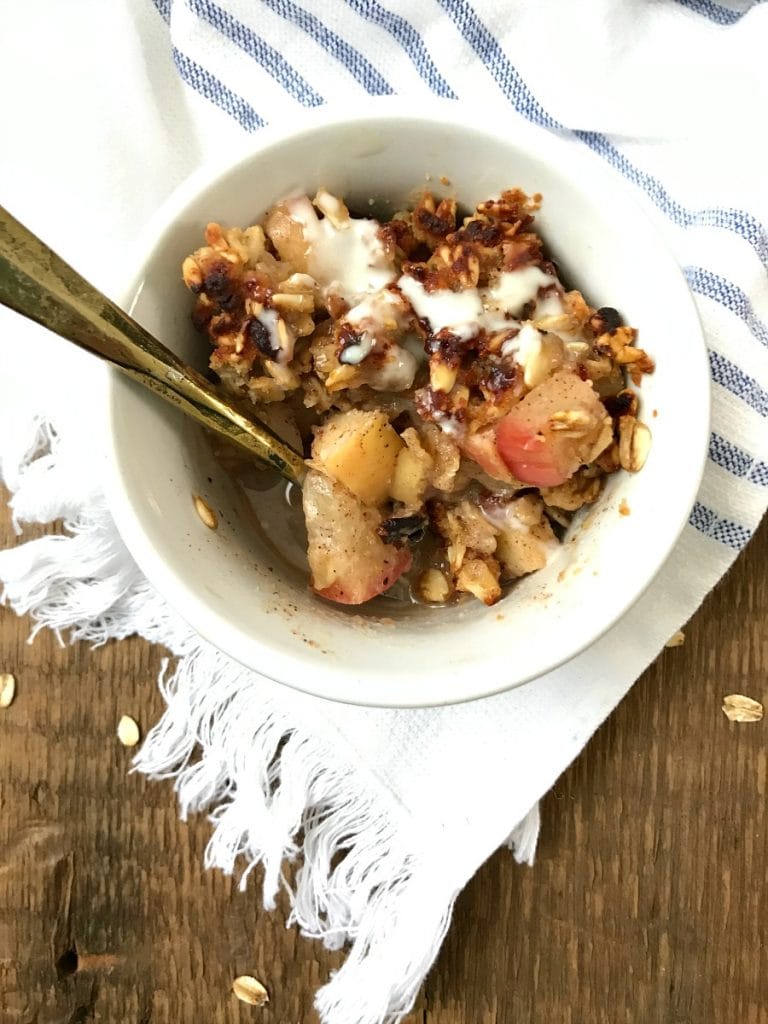 Thank you Bob’s Red Mill for sponsoring this post. It means so much to me to work with brands that I love and use in my kitchen daily! 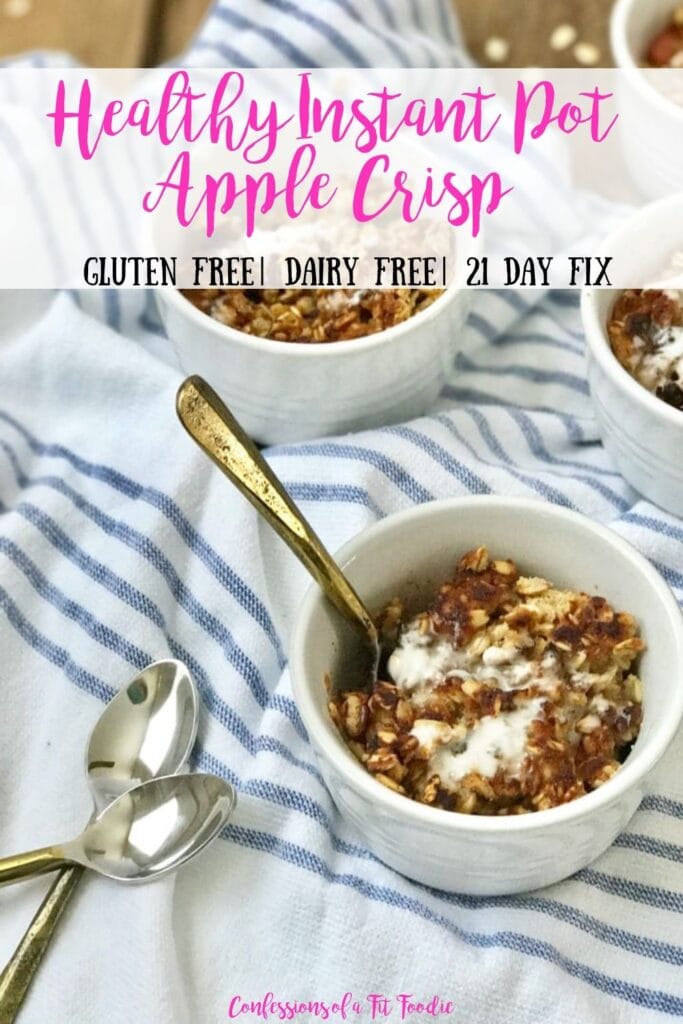 Have even more apples? Make this yummy Instant Pot Applesauce from Carrie Elle!

**This post was originally created on Nov 12, 2017; it has since been updated with a video! 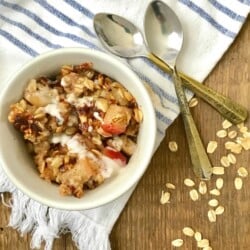 Author: Nancylynn
So quick and easy - this Gluten Free Apple Crisp is fast enough for a weekday dessert (or breakfast), but delicious enough for the Holidays. I make this as Instant Pot Apple Crisp, but you can also make this in your oven.
4.91 from 10 votes
Servings : 4 servings
Print Recipe Pin Recipe
Prep Time 10 mins
Cook Time 10 mins
Total Time 20 mins

For the crisp topping

For the coconut cream drizzle 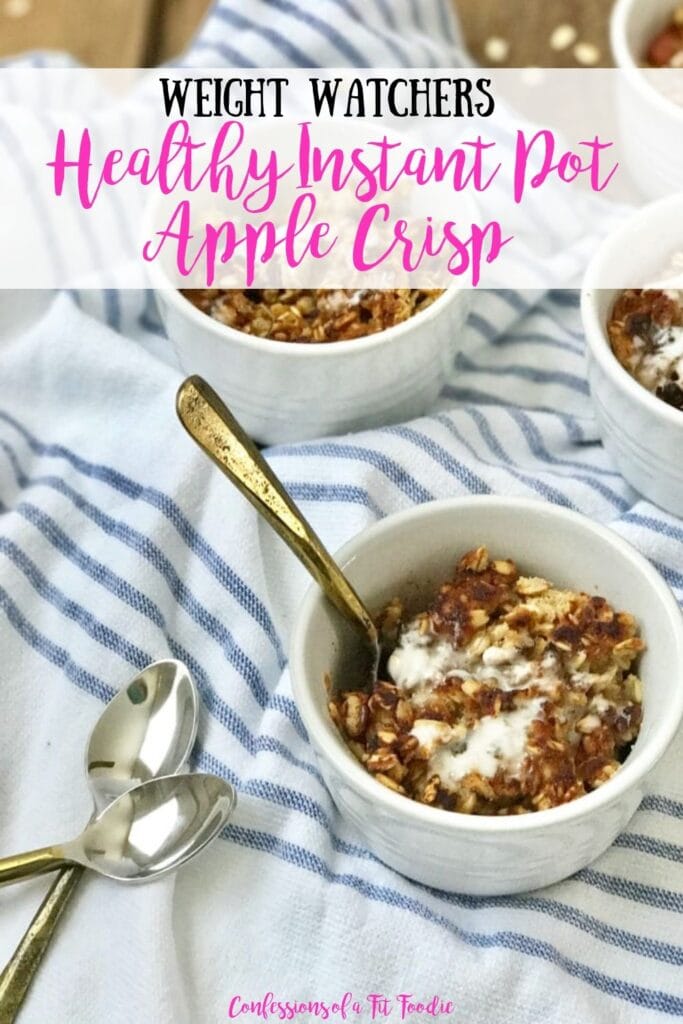